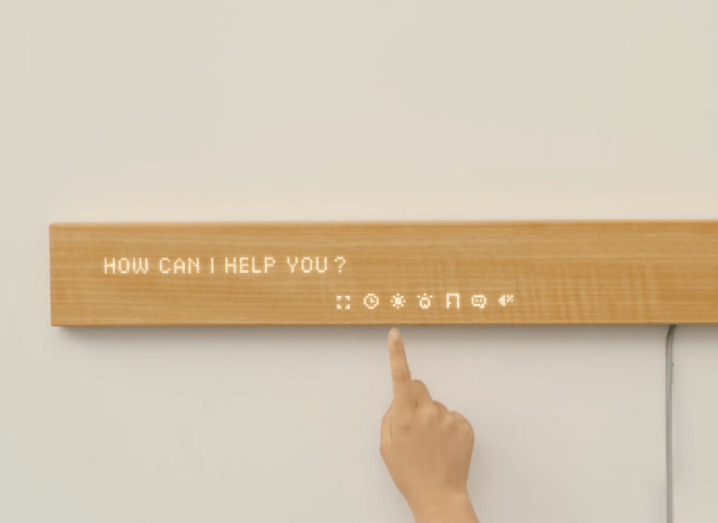 This week in IoT, it is hard to ignore the glut of new devices released to the world at CES 2019, including a plank of wood.

For the uninitiated, the Consumer Electronics Show (CES) is arguably one of the largest gadget expos in the world, but over the past five years or so it has transformed to the point that it now includes flying and autonomous cars among its roster.

However, internet of things (IoT) devices remain the focus of much of the event, with every object you can think of being made ‘smart’ by connecting it to the internet. One of the most eyebrow-raising at the event was the Mui Smart Display that, when not active, looks like a plank of wood – because it is one.

First launched as a Kickstarter campaign by the Japanese start-up Mui Lab, the plank contains a touch-sensitive, LED display showing the status of other smart devices you might have in your home, such as a thermostat or music system.

It also performs standalone functions such as displaying local weather and users can issue commands through Google Assistant, or receive news through speech. Right now, the only way to get a Mui plank is to have backed it during the crowdfunding campaign. Those who have are set to get to their device by September this year.

Also at CES, appliance giant Whirlpool revealed a new oven that dabbles in augmented reality (AR) technology: the Whirlpool Connected Hub Wall Oven with a 27in transparent LCD screen on the door.

What this means for the user is that you can still look through the door to see how your roast beef is doing, and the display will also let you check out personalised recipes based on what you have in there. It will also do other smart object stuff such as let you check your calendars and other basic information.

The screen also acts as a display for video recipes through its Yummly platform. The AR element kicks in when the oven suggests to you the best way of cooking your food, such as showing you on-screen where your shelf should be in the rack.

For anyone hoping to buy one of these ovens soon, you’ll have to wait as Whirlpool has said it’s still in the concept stage for the moment.

Within its Aicon concept autonomous car, Audi promised at the event a ‘mobile amusement park’ for passengers. This meant equipping the car with the ability to watch movies as well as play video games and interactive content in the future using virtual reality glasses.

Audi said its new technology – developed through a spin-out called Holoride – adapts virtual content to the actual movement of the vehicle in real-time.

As for the car itself, the Aicon was first displayed at CES back in 2017, but it remains Audi’s flagship autonomous car of the future with no human controls inside such as a steering wheel or pedals.

Away from the flashy gadgets at the main event, security and privacy advocates warned of the dangers a multitude of IoT devices poses for the future corporate world. More specifically, could the way two particular devices talk to one another – such as between a refrigerator and a smartphone – spark a legal dispute?

This scenario was put forward at CES by Steve Bunnell, chair of O’Melveny’s data security and privacy practice, who was previously a general counsel of the US Department of Homeland Security.

“The key question is whether internet-connected home products will spread consumers’ data into places they didn’t intend it to go. Manufacturers will have to determine if the new products they are bringing out cross the line between a valuable, new convenience and an unwanted intrusion,” he said.

“Courts will need to take a close look at whether manufacturers’ privacy and data practices are strong enough to protect their customers as technology wires their homes in unexpected new ways. IoT brings with it a whole new world of legal risk.”

Want stories like this and more direct to your inbox? Sign up for Tech Trends, Silicon Republic’s weekly digest of need-to-know tech news.

Colm Gorey is a journalist with Siliconrepublic.com