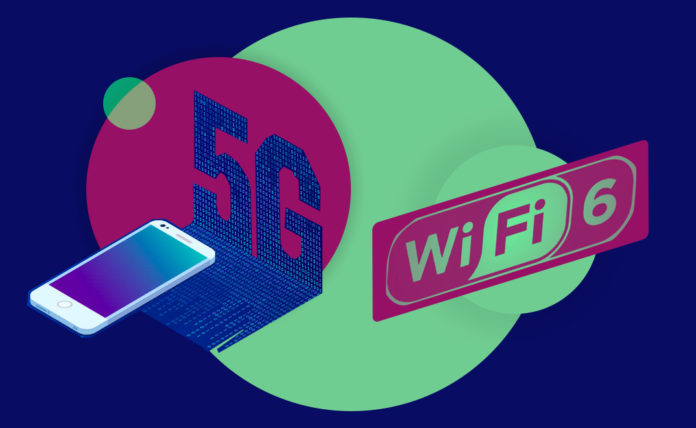 New wireless standards are expected to revolutionize IoT, with blazing speeds, low power requirements and high bandwidth. As WiFi 6 and 5G hit the market in 2019, debates like “5G WiFi 6 vs 5G” for IoT will intensify. But WiFi 6 and 5G may be symbiotic after all.

Thanks to two new wireless standards rolling out this year—WiFi 6 and 5G—2019 is shaping up to be a watershed year for the Internet of Things (IoT). These new technologies are expected to revolutionize IoT, and mobile communications in general, with blazing speeds, low power requirements, and high bandwidth. Let’s see what these emerging technologies are all about and why they’re so exciting for the future of IoT.As #WiFi6 and #5G hit the market in 2019, debates like ‘5G WiFi 6 vs 5G’ for #IoT will intensify. But these two standards may be symbiotic after all. || #IoTForAll #SmartCity #Mobile #WiFI @antgrasso @MasterOfIoT @TamaraMcClearyCLICK TO TWEET

WiFi 6 Is More Than Just a Name

WiFi 6 is the name for the next generation of the wireless standard, following the current 802.11ac protocol. WiFi 6 is technically called 802.11ax, but in addition to new wireless technology, it’s also bringing with it a new naming scheme: it’ll be known simply as WiFi 6, while 802.11ac will be referred to as WiFi 5.

WiFi 6 will be up to four times faster in device-dense areas and offer much greater bandwidth than its predecessor. With internet service getting faster than ever, WiFi 6 will allow wireless devices to take full advantage of these new speeds.

These new technologies are expected to enable homes and businesses to have more devices active at once while using less energy. That’s important, because experts predict nearly 31 billion installed IoT devices around the world by 2020.

5G is the name used for the next-gen cellular technology that will replace 4G LTE. Typically, cellular networks have covered larger areas, while WiFi handles things on a smaller scale. 5G may challenge this paradigm, though, with providers planning to offer personal 5G networks for in-home use.

5G cellular connections will be significantly faster than even the fastest LTE speeds currently available. Apart from faster speeds, 5G will bring much greater bandwidth and capacity to networks, just like WiFi 6. This will enable an explosion of devices as networks handle higher usage without a slowdown.

WiFi 6 and 5G Will Transform How We Use IoT Devices

Why all the fuss? Well, in addition to their faster speeds, both 5G and WiFi 6 will improve signal strength in congested areas, like downtown urban centers or crowded homes. These are places that previously had too much wireless traffic to make always-on devices practical, but with higher-capacity networks, this overcrowding problem will become a thing of the past.

On the business side, the new speed and bandwidth of WiFi 6 networks could be used to provide faster guest WiFi for customers and could also power connected devices like beacons to provide additional services to shoppers. The efficiency of the new technology could potentially lower costs on both networks and the devices themselves, enabling even small businesses to take advantage of these new technologies.

On the consumer side, we may see not just a few specific devices but entire smart homes connected with 5G cellular rather than a home WiFi network. Many home security systems already use cellular networks for monitoring and reporting, but 5G can make it much simpler to install smart devices wherever you want. With future cellular devices, you could place your security cameras, smart locks, or digital assistants wherever there is 5G service instead of using Bluetooth, Z-Wave, or WiFi connections. 5G may also mean easier out-of-the-box setup because you won’t need to configure devices to your WiFi.

How IoT Devices Will Change

As 5G and WiFi 6 come to the market in 2019, expect to see IoT devices designed to send more information and to use less power. These technologies could enable always-on, always-connected devices that use less energy and offer longer battery life.

Devices of all sorts are also likely to start shipping with SIM card trays or embedded SIM cards to enable the cellular functionality, which will be a change from the current trend of WiFi devices. WiFi won’t go away entirely, but a long-range cellular connection offers a lot of advantages over a fixed WiFi network, especially when speeds are comparable. WiFi may become the fallback when 5G cellular isn’t available, rather than the other way around as it currently is on many devices.

The rollout of WiFi 6 and especially 5G cellular networks will make 2019 a very exciting year for the IoT industry. While it’s a little early to tell exactly how things will play out, one thing’s for sure: there’s a lot to look forward to.

The rise in automation and what it means for the future