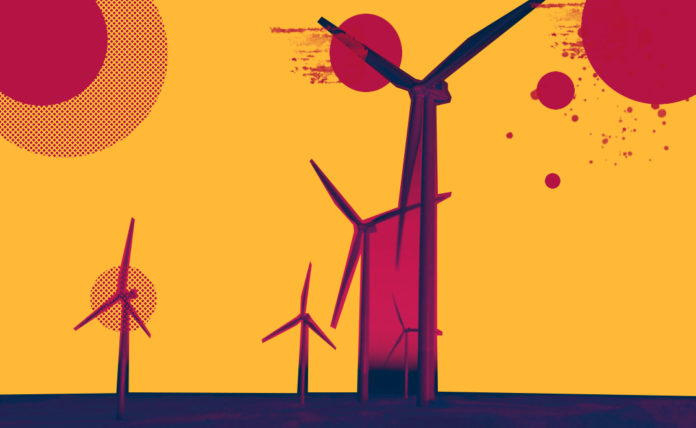 The interconnected world runs on energy; wind can be a very big part of that picture if the hardware makers can guarantee its wireless electronic instrument needs are met. Wind farms are an excellent example of connected machines that can operate independently until something goes wrong. The best systems now combine the ability to optimize performance and to better predict maintenance needs.

A North Sea structure lost its main turbine housing last year, prompting engineers to determine that all 206 units of this size in the sea might need to be examined and refitted. The North Sea is the most violent wind and current area to have giant turbine farms in trouble, but other regions are having maintenance problems as well.

North Sea wind farms are fighting some striking battles, and they aren’t about sea life. They began with the breakdown of Germany’s biggest turbine-bearing structures after 15 weeks; predictive maintenance had planned for the structure to last 15 months. The result was a disastrous maintenance bill and a re-engineering of the giant blades that appear to be the culprit: they literally shook the turbine to death.

The energy of the future will be interconnected. Wind can be a very big part of that picture if the hardware makers can guarantee its wireless electronic instrument needs are met.

The role of predictive maintenance in design engineering for these giants jumps up the importance ladder every time a customer adds megawatts to the overall farm scheme. Monitoring wind shear, temperature in the sea/air, wind speed, torque and vibration are now just the tip of the iceberg. Every design must include instant and early warnings about bearing temperature, housing integrity and wiring, above and below the waterline.

Internet-connected safety systems have become standard in cars, trucks and aircraft, and a lot of funding for interconnected systems is included in development of autonomous traffic. Fail-safe systems engineering is part of the R&D budget for every new model. Electrical engineers build safety into the most basic apparatus; the more complex the system, the more it needs secure information.

For industrial networks connected to the most remote structures, like North Sea turbines, redundant systems are important. Every designer needs to combine early warning, security and responses like shutouts/shutoffs in new turbine designs. Maintenance strategies have always been designed as routines. These routines need severe upgrading, but the more aggressive approach is to add an active warning apparatus.

The best systems now combine the ability to optimize performance and to better predict maintenance needs. The system is both fast and powerful. “The platform’s unique ability to analyze terabytes of data with sub-second response times further improves our ability to generate significant value from our IoT applications,” the article said. Every wind turbine in operation under this study has more than 150 sensors checking speed, weather, vibration and acceleration (deceleration).

The network for extreme environments must work in both directions. It must transmit from the sensor or probe out through the protected mainframe to the emergency board location. The resulting decision about a shutdown must be transmitted back through the same network or through another. The response to overheating, for example, could be a shutdown or slowdown.

In each incident, the more data that can be collected, the better the network can “learn” how and how not to proceed. Machine learning that starts with the safety of the equipment as top priority will adjust to circumstances.

Examples of this type of industrial software learning are everywhere. Examples include autonomous cars (probably the most newsworthy example today), fraud detection, robotics, and social networking. Algorithms abound for drilling down to the most remote details of an electronic trail.

Wind farms are an excellent example of connected machines that can operate independently until something goes wrong. Systems in machine learning can help refine operators’ choices, eliminating the need to shut the system down completely, or even shut a single turbine down.

When the learning aspects of a network combine with more robust, redundant systems, they work together, making learning quicker and more efficient.

The lessons learned from tracking and troubleshooting systems based hundreds of miles out in an angry sea will help design safety into smaller turbine farms, on the scale of city or community electric grids. Most utilities have plans for wind and solar but are still concerned about costs, safety and support.

Designs for the next generation of turbines will be scalable, just as the farm is scalable today. Inside a single turbine system will be the ability to use machine learning and IoT to scale itself to its most efficient use, including shutting itself down or automatically sending its power to a battery site.

There are many examples of companies now designing for the future. Countries that seemed less concerned about wind and solar development a few years ago are now investing heavily. An example is Turkey, which has garnered $12 billion in investments in wind over the last 11 years. The country’s generated output in 2007 was 146 megawatts; last year, the wind power farms generated 6,500 megawatts, the report said. In an industry that multiplied out 50 times in 11 years, maintenance and better monitoring will be essential.

Turkey is far from alone growing wind power by factors of ten. The interconnected world runs on energy; the energy of the future will be interconnected, too. Wind can be a very big part of that picture if the hardware makers can guarantee its wireless electronic instrument needs are met.

The IoT in Elevators Market Is Rising

Bringing Life to ‘Things’ a Framework for IoT

Making IoT Visible Is Essential For Getting Back To The Office...