Home IoT How Does the Internet of Things Work? 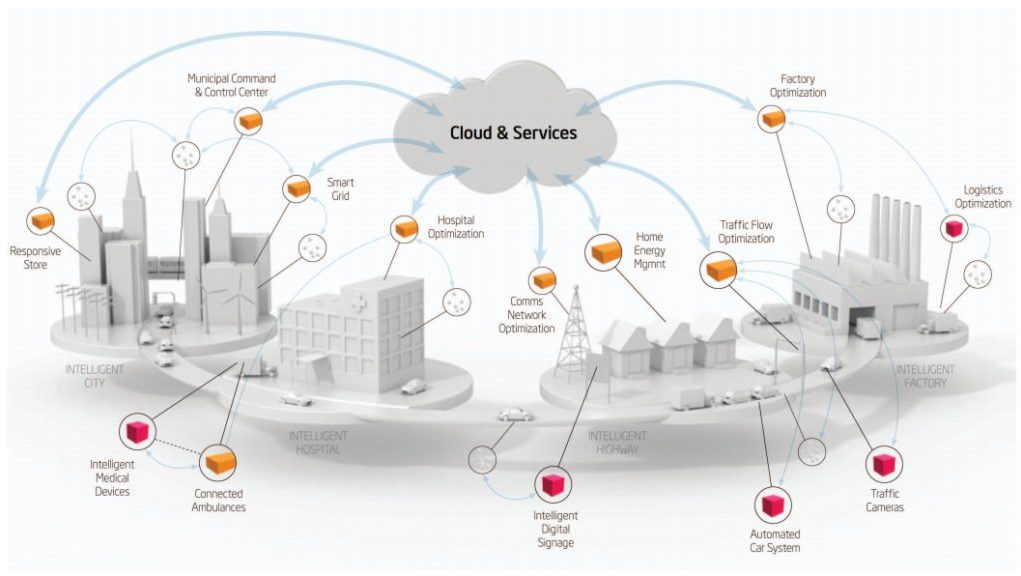 How does the Internet of Things (or “IoT”) work? What is it? Why does it matter? In some ways, answering those ever-changing questions is the goal of IoT For All. Let’s dive into an easy-to-understand definition that won’t answer all of your questions but will at least give you a place to start asking the right questions!

So, Where Did the Internet of Things Come From?

In the 20th century, telecommunications technology enabled us to hold conversations with each other at great distances with phones.

In the 1980s, we started to connect personal computers (PCs) to the internet, a new telecoms protocol at the time, to share and access resources and information beyond simple voice data across vast distances really quickly.

Starting in the early 21st century, Apple changed the world with the iPhone. They enabled us, everyday citizens, to hold the power of the internet in our palms on the go. The mobile generation truly began.

Finally, here’s where the Internet of Things (or “IoT) fits into the story!

The Internet of Things refers to the practice of connecting objects and devices to the internet that previously were “outside” of the reach of the internet. As we’ve seen, until just a few years ago, the internet was constrained to basically two things: computers and then cell phones. Now, we’re bringing a whole range of things online: cars, speakers (e.g.Alexa), home devices like fridges and washing machines, city municipal infrastructure, farming equipment—the list goes on.

The Internet of Things enables citizens, businesses and governments to interact remotely and at scale with a host of once-disconnected objects. It enables us to gather data from them, generate insights from that data, and then (sometimes) send instructions back to those devices that help those devices (cars, tractors, whatever) better to perform their tasks.

The Internet of Things gives humans the power to connect the physical world around them to the internet, and to interact with it via a digital representation or “twin” of it.

Core Components of an IoT System

The heart of IoT is billions of interconnected devices, generally, sensors and actuators, that enable you to sense (and sometimes control) the physical world around them. In addition to network connectivity to transmit the data they collect, these devices require some basic processing and storage capabilities, which is often provided by a microcontroller, a system-on-a-chip (SoC), or a field-programmable gate array (FPGA).

IoT devices are embedded devices. They may be prototyped using commoditized micro-controller platforms, such as Arduino, with custom printed circuit boards (PCBs) developed at a later stage. Prototyping with these platforms requires circuit design skills, micro-controller programming, and a deep understanding of hardware communication protocols like serial, I2C, or SPI used to establish communication between the micro-controller and the connected sensors and actuators. The embedded programs are often developed using C++ or C; however, Python and JavaScript (for UIs and platforms) are becoming more popular for prototyping and scaling IoT systems.

Security is one of the most critical concerns in IoT, closely related to data ethics, privacy and liability. It must be built-in at every step of the design of the system. With millions of new devices connected every day, the number of potential (and real) attack vectors grows daily. With so much at stake, security engineering skills, including threat assessment, ethical hacking, encryption, securing network architectures and applications, event monitoring, activity logging and threat intelligence become mission critical.

Network design and management are essential in IoT, due to the sheer volume of connected devices and because of the impact that network design decisions can have in deployed IoT systems at scale.

Connectivity enables devices to communicate with other devices as well as with applications and services that are running in the cloud. Although cloud computing and IoT are two very different technologies, real-time data streaming and cloud integration are crucial for the proper functioning of IoT. Cloud infrastructure is used for data storage, processing and analysis, as well as for implementation of the business logic of IoT applications.

The number of IoT devices transmitting data increases on a daily basis, which turns big data into huge data. Developers will need to securely and reliably ingest, store, and query the vast quantities of heterogeneous data originating from these devices. Many IoT devices generate latency- or time-sensitive data, so it’s also useful to filter or discard irrelevant data at the edges of your network rather than sending everything up to yourservers.

To deliver value and make sense of the huge volume of data that is generated by IoT devices, machine learning and AI are useful tools in an IoT system. These techniques, by which you teach a machine to learn by exposing it to tons of data about a situation, can be applied in real-time, both to sensor data streams for predictive analysis and to make decisions autonomously in response to incoming data. Machine learning can also be applied to historical data to identify patterns or anomalies in the data that may allow you to make important decisions.

The impact of IoT on industrial ecosystems has resulted in the emergence of robust physical-cyber connectivity, often called the fourth industrial revolution, aka Industry 4.0, also known as the Industrial Internet of Things (or “IIoT”). The connected ecosystem refers to physical connected industrial assets, including those on the manufacturing shop floor as well as connected logistics vehicles, processes and more.

Putting the local community at the heart of the smart city: Part two

Why Is the Machining Industry Going Digital?

Smart Technology and the Threat to Privacy: Who is Watching Whom?