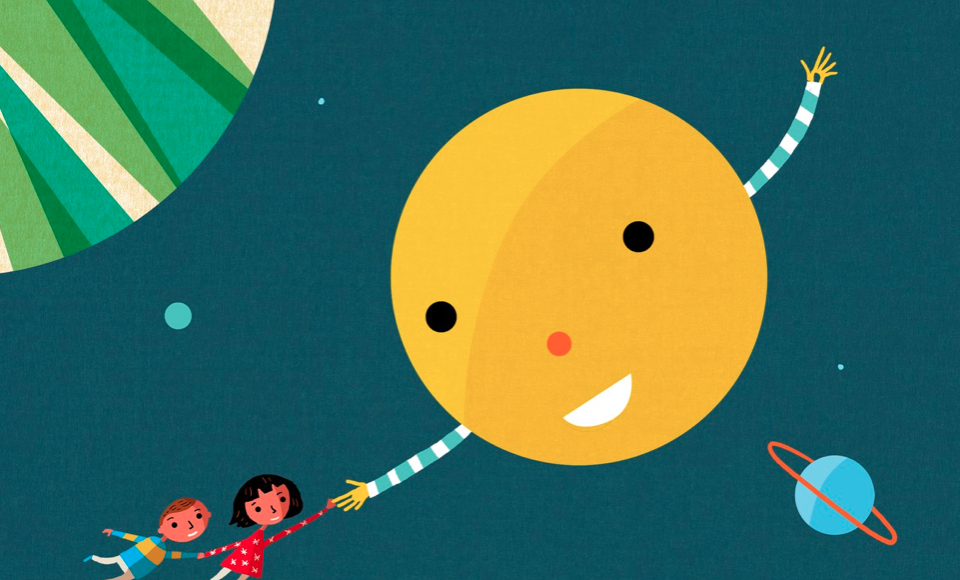 Can augmented reality help children with reading skills? Boring math lessons? Chris Milk and the team at Within believes it can.

I swear I learned this once in school. Something about fusion and explosions. Yet for the life of me, aside from a few Lady Gaga musical montages, I can’t remember how a star is born. Luckily, I have Clio to help. She’s a tiny particle that, thanks to the program built with Apple’s ARKit on the iPad I’m holding, is showing me all over the galaxy. She got chased out of her nebula by a bully named Lewis and needs help. “I want to be a star—a gorgeous celestial star that illuminates the universe with beauty,” she says. “But Lewis says I’m too little.” We go on an adventure to confront her bully, seek the wise counsel of Red Giant, and (spoiler alert!) she becomes a star. The whole thing takes about 8 minutes—and takes me right back to science class.

This is intentional. Clio’s Cosmic Quest, the latest augmented reality experience from VR/AR company Within, is meant to help kids learn. It asks children questions and is designed to coax them into reading aloud. It turns any surface they’re near—a dining room table, a bunk bed, a park bench—into another galaxy and then explains how it was formed. It might be the best 8-minute astronomy lesson out there. It’s not alone.

Clio’s Cosmic Quest, released August 13, is the fourth experience for Within’s Wonderscope app. The software, which the company debuted last November, is intended for kids to use at home or in school (it’s already being used at after-school programs in Los Angeles), turning what otherwise might be brain-rotting screen time into a way to improve their reading skills and knowledge. Wonder’s Land Ringmaster Wanted has kids interact with a rabbit as he’s reminded why he loves his home; Little Red the Inventorflips the traditional Little Red Riding Hood story on its head, teaching them to use their smarts to avoid the Big Bad Wolf; and A Brief History of Amazing Stunts by Astonishing People is self-explanatory—the highlight is the tale of Helen Gibson, Hollywood’s first stuntwoman.

“We launched with those [first three] to see if there was a signal that people were into augmented reality storytelling for children, since it was a totally foreign concept,” says Chris Milk, Within’s CEO and the driving force behind Wonderscope. “The signal came back that they were excited about it, so we started a new production cycle to make a bunch more stories.”

Within isn’t the only team combining AR and learning. Earlier this month, a report from the organizers of the XRDC conference, polled 900 developers working in virtual, augmented, and mixed reality and found that 33 percent of them said their current projects were focused on education. (The previous year’s report didn’t track education work specifically, but suffice to say this number was a sizeable uptick.) As AR experiences—from smartphone games like Minecraft Earth to offerings from Magic Leap—gain traction, they’ll become a go-to medium for myriad applications. Within’s most recent project is right on time.

Wonderscope is just the latest big idea to emerge from Milk’s brain—and a somewhat surprising one. He started his career as a director of music videos, making clips for the likes of Kanye West and Jack White. Over time, though, he turned his attention to interactive projects like The Wilderness Downtown, a partnership with Arcade Fire and Google to make an interactive HTML5 experience. (Remember those?) Soon, he moved on to virtual reality filmmaking, creating scores of experiences, and eventually launched Vrse, later renamed Within, working with his Wilderness Downtown collaborator Aaron Koblin. When Apple began previewing ARKit to developers before announcing it in 2017, Milk’s team was among the first to get a chance to play with it, and Wonderscope was born.

But Wonderscope was more than just a new toy for a new medium. It had a direct connection to Milk’s childhood. He had dyslexia as a kid and didn’t find the same joy in reading that he did in making up tales with action figures and cardboard-box spaceships. “It was so non-interactive and not alive. There’s no feedback loop when you’re just slogging through. Whereas in Wonderscope, you’re reading a line that you are saying as a character to another character who’s looking at you,” he says. “That is much more the world that I enjoyed and lived in as a child. So combining those two things together was personally really meaningful to me.”

Wonderscope wasn’t necessarily built to be an app to improve reading skills. The first iterations were actually just story books for iPads, simple things that used voice-recognition to make sure kids were reading along to an animated story. Milk face-palms now when he thinks about the fact that his team basically just reinvented the children’s book. “We were making the first mistake of every new medium: copying the medium before it,” Milk says. Then, when they started giving it to actual kids, they learned Wonderscope experiences were very good at boosting reading confidence.

Jonny Ahdout, Within’s director of development, has favorite memories of seeing this in action. Once, when testing the app with parents and their kids, a mother worried about her child with a speech impediment reading aloud in front of others—only to be delighted when her daughter was happy to do so. Another time he saw a 9-year-old who’d said “I’m not a great reader” follow along so well with the app that she called over her younger sister to teach her the words. “I’m like, ‘Yep. Where’s the camera? This is our promo right here,'” Ahdout says.

It just so happens that the Within team wasn’t, as Milk predicted, the first to think of AR as a new way to make books. They weren’t even the first to think to use it for education. A paper in the Journal of Educational Technology Development and Exchange noted “the potential of AR books to appeal to many types of learners, through many paths, is undeniable, and exciting for educators” way back in 2011. PBS released a math-focused AR app for kids that same year. Research continues, but those who study augmented reality believe there are lots of possibilities for using it in education—but as with all learning, there are curves.

AR has the ability, for example, to provide context for things in the real world (think: pointing your camera at a painting and learning more of its history). With young people, the interactivity of augmented reality can help make boring topics interesting (think: math). Currently, it’s challenging for schools or after-school programs to offer AR as part of a curriculum across the board, but according to Judy Perry, the director of MIT’s Scheller Teacher Education Program, the possibilities are there.

“Teachers probably want to think about ways [to use AR] to teach things that are hard, that aren’t particularly engaging to students, but are important,” Perry says. “The piece of augmented reality I find most compelling is the way you’re mingling the digital layer with the real world”

It doesn’t hurt that Wonderscope’s target demo—kids roughly 6 and up—grew up with smartphones. Unlike their parents, they didn’t have to learn how to interact with screens—many of them have been doing it since they were old enough to hold objects. (One of the other things the Within team learned when they started giving Wonderscope to children was that not only did the kids want characters to talk back to them, they expected it.) Within hopes to make more screen time positive screen time. The way Milk sees it, devices have typically been the things people look at when they want to shut out the world (or distract their kids); AR “completely inverts that. We’re enhancing the world around you.”

So far, this has proven true. In April, Within partnered with the Los Angeles Public Library system and an after-school program called LA’s Best to give 500 young people in 17 area schools and libraries a chance to use Wonderscope. LA’s Best president and CEO Eric Gurna says the Wonderscope experiences not only helped kids with their reading skills but also piqued their interest in technology and creating AR on their own.

“AR can help kids understand through experience—more than reading words on a page,” Gurna says. “When you’re physically engaged with a topic, like anatomy or photosynthesis, the experience can really help gain a deeper understanding. [It] can also help with expanding cultural understanding, which is crucial at such an early age.”

Speaking with Milk just before he and Ahdout give me a chance to go on Clio’s Cosmic Quest, he mentions another, more practical, aspect of educational AR, and augmented reality in general: It’s scaleable. For years he was making things that only a select few people with VR headsets would ever see. Creating something for a device millions of people have in their pocket makes Within’s work a lot more accessible. If Pokémon Goand Harry Potter: Wizards Unite have taught us anything, it’s that folks will give AR a try if it’s fun and available on a device they already own. Wonderscope does the same thing, it just uses that momentum to help kids learn.

Where it will scale to, though, is an open question. Right now, Wonderscope is mostly used by families who’ve downloaded the app. But Within would like to get Wonderscope integrated into more school curriculums and after-school programs. That is, admittedly, a challenge. Apple helped Within provide the iPads for its programs in April, but it’s much harder to get entire school systems to adopt that kind of technology. Within is giving lesson plans and other assistance for teachers who can offer Wonderscope.

“It’s a combination of where our product is heading and also how school systems are getting ready to incorporate immersive media into their classrooms,” Ahdout says. “We’re going to be looking at how it can all fit.”