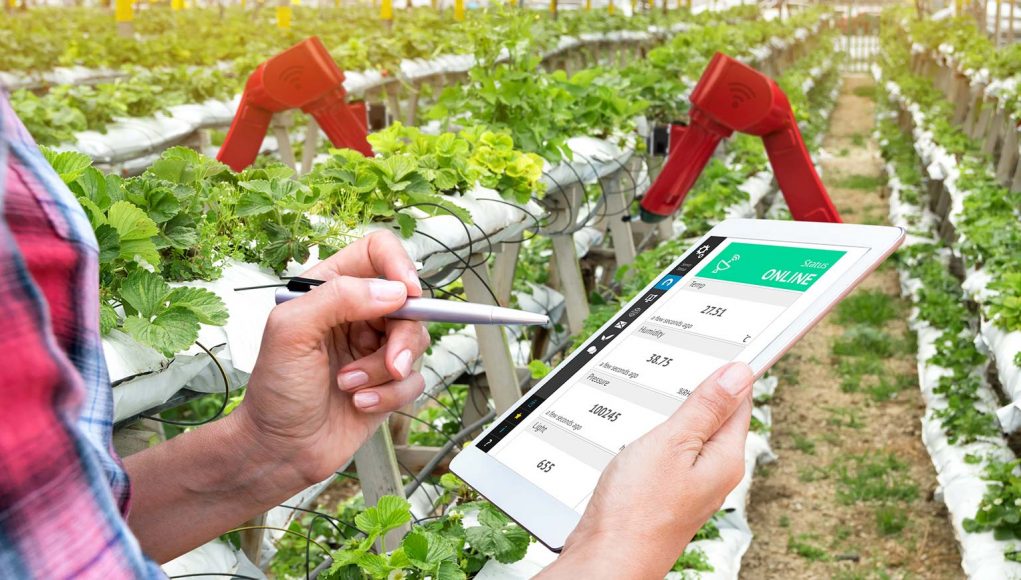 Connected sensors and big data are changing how farmers grow crops and raise livestock—making food safer and better for everyone.

he Internet of Things (IoT) is turning the ancient practice of farming into precision agriculture. Sensors implanted in the soil can tell you when and where to irrigate. Cameras attached to a drone flying over a field of soy beans can spot a mite on a leaf from 400 feet. IoT devices for cattle can tell you when heifers are about to calve or when cows are in heat.

Companies like Sid Wainer & Son are leveraging these types of high-tech innovations to make their farms more efficient and productive. For more than 100 years, Sid Wainer & Son has sold specialty foods—heirloom tomatoes, green eggplants, fig-infused balsamic vinegar—throughout New England. And now, over the last two years the Wainer family’s 25-acre farm and greenhouse in southeastern Massachusetts have been serving as test beds for the future of agriculture.

Working with local technology incubator ImpactLABS, Wainer installed digital sensors in its freshwater wells to gauge how quickly the water level was restored after days without rain. The company also planted sensors in its greenhouses and fields to measure light, humidity, and temperature. The data these sensors collect helps the farm decide how and where to plant, says farm manager Ben Comeau.

For example, fields near wells that refill quickly are better choices for water-hungry crops like tomatoes and strawberries, says Comeau, while greenhouse sensors help gauge the optimal temperature for keeping plants healthy during the frigid winters.

IoT devices like these generate massive amounts of data and stream it to the cloud, where it can be shared, analyzed, and used to drive decisions. Together, IoT sensors and big data are beginning to supplant the Farmers’ Almanac as the indispensable information resource for modern agriculture.

“In the olden days, we had technology like weather sensors, but none of it was integrated with the internet and our mobile devices,” says Frank E. Gillett, vice president and principal analyst for Forrester Research. “Now we can automatically get information from the physical world—the fields, animals, and equipment—and even control the action remotely to, say, adjust the watering pattern or summon the animals back to the barn.”

CropX sensors measure soil conductivity (which reveals how much moisture and fertilizer is in the topsoil) and then transmit the data to the cloud via SMS. Farmers screw one softball-sized sensor into the ground every 40 acres or so; the sensors help them determine the right time to irrigate, which can greatly reduce water and power consumption.

A center pivot—a massive mechanized irrigation device that pumps out 1000 gallons per minute continuously through the growing season—can use $500 worth of electricity to complete one full turn, Tzach says. Farmers can combine information collected from CropX sensors with weather data to identify the optimal days for turning the pivot on and off.

“If we’re able to save a few pivot days a season, the farmer has paid for the entire CropX system for two or three years,” he says.

Intelligent water management improves yields from crops like potatoes and cotton that are sensitive to over-irrigation, Tzach adds. It can also prevent runoff of harmful chemicals into nearby water sources.

In many cases, IoT devices help level the technological playing field for smaller farms. For example, GrainSense sells a handheld device that uses spectral imaging to determine how much protein a kernel of grain contains. Farmers can use it to determine how to optimize fertilizer and pest control and which fields to harvest first, says Edvard Krogius, CEO of GrainSense.

The device also allows farmers to separate the yield into low-protein strains, which are suitable for animal feed, and higher protein ones aimed at human consumption, which can command a greater price.

The really big farms usually have their own spectrometers, says Krogius, while small to midsize farms usually send grains out to a lab to be analyzed, which could take up to a week.

“Farmers in the middle of a harvest don’t have time for that,” he says. “Getting accurate information right away is critical.” GrainSense gives them the answer instantly.

On Call for Cows

Farm IoT isn’t limited to crops. Dairy farmers have been using technology to manage herds since the late 1990s, typically in the form of RFID tags. These are now being supplemented by IoT devices.

For example, an IoT-based system from Moocall helps determine when cows are in heat. A bull wears a collar that tracks its activity around cows and heifers, which sport RFID ear tags.

The company also created the Moocall Calving Sensor, a monitor for pregnant cows. The sensor slips over the tail of a pregnant cow and sends alerts when it’s about to give birth. This ingenious device employs accelerometers to track the movements of the tail, which indicate when the animal is about to go into labor, explains Alan Horan, senior researcher for Moocall. It then transmits this data to the cloud using a cellular connection and sends an alert to the farmer via an app, SMS, or email.

That means farmers can quickly intercede if the calving process goes awry. The remote monitoring capabilities of the IoT device are especially valuable since most cows give birth in the middle of the night—and losing a cow and a calf during the calving process can cost a farmer in excess of $2,000, says Horan.

“Currently, farmers just observe the animals themselves and judge when they’re needed,” he says. “The systems we’ve created allow them to remotely monitor critical animal events, so they only need to get involved when required.”

The real value of IoT devices is in the data they collect. By 2035, farms are projected to produce more than 4 million data points each day on average, according to agri-data firm OnFarm. That data is most useful when it’s run through machine learning models to generate insights and predict outcomes. That in turn requires a robust connection to data centers in the cloud, powered by virtual technology.

Precision agriculture is morphing into predictive agriculture, says Arama Kukutai, cofounder of Finistere Ventures. The venture capital firm has invested in a handful of agtech companies, including CropX and Taranis, which uses high-definition imagery to predict crop disease and pest infestations.

“An aircraft equipped with a camera can fly over 10,000 acres an hour and spot a mite or the beginnings of Asian soybean rust on a leaf,” he says. “That’s a massive amount of data to process, far too much for a human. But it lends itself well to AI/machine learning, which can predict the future state of the field and the possible impact of disease on the crop.”

“When you put a sensor in the ground, it’s able to learn the soil characteristics by itself,” he says. “It knows if it’s in heavy or light soil based on the drying curve after irrigation, because each soil type dries differently after a rain. That’s just one example of many.”

Agtech company FieldIn takes data from third-party IoT sensors that measure when, where, and how much pesticide has been sprayed in orchards and vineyards. The company then uses that data to create the world’s largest database on pest control practices, says Eyal Amit, vice president for business development at FieldIn.

By aggregating and analyzing data from thousands of sprays, FieldIn can provide more precise guidance for fruit and nut growers.

“Say you’re a grape grower in Napa and you’re seeing powdery mildew in May,” Amit says. “We can look at data from thousands of growers and say ‘Here’s the ingredient that works best for powdery mildew in Napa in May. But if you have the same pest in July, you should use a different mix.’”

But while big agribusiness concerns have largely embraced agtech, small to midsize farms often lag behind.

“There is a certain level of skepticism in farmers regarding technology and a certain traditional attitude of doing things the way they’ve always been done,” says Moocall’s Horan. “A lot of our users didn’t buy the device themselves. It was bought for them and then became a core part of their system. Now they’re our biggest fans.”

Smaller farmers are often both hesitant to change and more price sensitive, says Alex Lykken, a senior analyst for Pitchbook, a financial data firm that tracks equity investments in agtech and other emerging technologies. This can make it harder to persuade them to invest in unproven technologies.

“Farmers are hard test cases,” he says. “The seasons are long, and growers typically have to wait a year to see how effective the new approach is. Did it boost yields enough to justify what the farm paid for the technology? Does it actually work?”

Lykken says some startups offer farmers technology at a substantial discount, hoping it will prove successful enough to warrant a heftier investment down the road.

Another barrier is that many farms are in remote areas with poor connectivity. According to the FCC, four out of ten rural Americans do not have access to high-speed internet service. And though many agtech IoT devices rely on low-bandwidth cellular connections that are more widely available, the wireless network doesn’t extend everywhere.

“Even in a country like the United States, there are still a lot of locations not in reach of 2G,” says Kukutai.

This technology also comes with some controversy attached. For example, every new farm machine made by John Deere comes packed with digital technology, like planting machines with sensors that detect how firm the soil is and automatically adjust how deep to place seeds.

When farmers buy a new John Deere machine, however, they must sign a software license agreement that restricts their rights to modify or repair it. As a result, consumer rights groups are now lobbying for “right to repair” laws. Meanwhile, some farmers are hacking their tractors, replacing the machines’ original firmware with cracked versions created in Eastern Europe.

Issues like these, as well as questions about who owns the data produced by these machines, have yet to be ironed out, says Forrester’s Gillett.

The true power of IoT farm data will be felt when it’s combined with blockchain technology—enabling growers, packers, retailers, and consumers to trace every product from inception to delivery, says Chris Rezendes, managing director for ImpactLABS, which recently merged with Context Labs.

“Consumers will be able to scan a QR code with their phone, look up that apple or tomato, and know where it came from, who grew it, and what happened to it every step along the way,” he says.

These are still very early days for blockchain, which provides a decentralized and secure way to verify identity and record transactions, says Rezendes. But it has the potential to disrupt a wide spectrum of industries, including agriculture, banking, publishing, and healthcare.

In the meantime, the IoT will enable farmers to grow food more efficiently, using less energy, water, and pesticides. Consumers will get a wider range of options in the grocery store and more knowledge about what they’re consuming. And the connection between creators and consumers will grow stronger, says Rezendes.

“The right technology can start to put power back to where it really belongs: the creators of the value and the customers who are paying for it,” he says.

Powering the Smart Factory with the Internet of Things