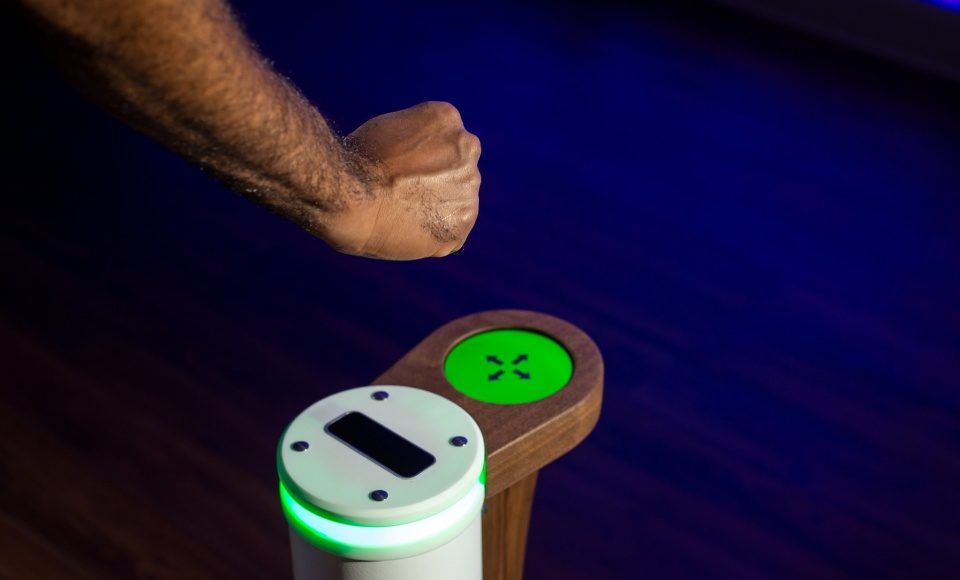 And the ways we might connect in a post-pandemic world.

The last time I exited an all-encompassing public health crisis, day to day life changed subtly but permanently. It was 2003 and, living in Hong Kong, we had just faced a SARS epidemic that left a little under 300 people in the city dead.

This crisis had a profound effect on not just the psyche of the city’s inhabitants, but the physical city itself. A housing complex had its drainage system overhauled when its design was blamed for a mass outbreak. Temperature checks through thermal imaging at the airport became standard. And the little things: plastic sheeting over elevator buttons, ever-present hand sanitizer in office lobbies, the normalization of wearing surgical masks in public when feeling a little sniffly. These changes aimed at mediating our physical contact with each other, whether directly or through shared space. Over the last 17 years, none of those things have gone away in Hong Kong.

The US will soon, hopefully, be entering a post-pandemic world. It will probably be a tentative experience. The memories are still raw and the conditioning — wash your hands for two “Happy Birthday” songs! Don’t touch your face! — is still instinctive. Meanwhile, all through 2020 the technology industry has pushed products geared towards minimizing, sanitizing or tracking physical touch. Which of these will we discard as society fully re-opens and what might become permanent?

Earlier this year, while epidemiologists were still working out the main ways the virus transmitted, we started to see new applications for wearables. The Immutouch, for example, was a wristband designed to break compulsive habits like nail biting by vibrating whenever the user raised their hand to a specific position. The founders pivoted instead to a product that buzzes when you’re about to touch your face. Over the summer, NASA made a similar product in the form of an open-source 3D-printed necklace called Pulse.

Touchless touchscreens, controlled by gestures, also arrived at museums and malls. One version, at the National Gallery of Art in Washington D.C., was made by Ideum. Not only do you control a cursor with hand movements, crooking your finger to click or making a fist to drag objects; if you try to physically touch the screen, the border turns red, dispensing a light reprimand. The system won Ultraleap’s developer competition to design a better touchless interface, a competition that also saw projects for buying customized ice cream and operating an elevator.

If you did have to make contact with the physical world, both Apple and Samsung introduced hand washing features on their smartwatches to dutifully clean up afterward. For the Galaxy Watch, a hand wash app reminds you to clean up every two hours and allows you to swipe to begin a 25-second timer once you start. In watchOS 7, meanwhile, the device can automatically detect when you’re washing your hands through motion sensors and the sound of running water, timing the process accordingly.

To monitor your condition, $300 Oura smart rings — the ones the NBA splashed out on — purported to detect COVID-19 symptoms by tracking temperature and heart rate among other metrics, while Fitbit also introduced skin temperature tracking on its Sense smartwatch. And, of course, Apple and Google’s exposure notification project can tell you if you crossed paths with someone who might be infectious.

Yet the fact is that the usefulness of some of these pandemic gadgets may not outlive the awful time we’re in. There is little evidence, for instance, that we need to don portable air purifiers, like the specimen LG is offering. Nor, as the science has increasingly shown that the virus spreads primarily through the air and not surfaces, are overzealous displays of public disinfection necessarily vital, even while regular hand washing and hygiene-consciousness remain important.

For a sense of the lasting touchless changes to our world, then, think instead of the subtle trends in moderating our use of touch that were already underway.

Contactless payments have long been rolling out; major stores from 7-11 to Kohl’s are now allowing in-store customers to pay through an app. Some US airports are using digital tokens on a smartphone to verify identity, reducing the back-and-forth of handing passports over to agents. New apartments are increasingly outfitted with keyless locks, opening automatically when you’re nearby or activating by smartphone. Restaurants have turned to menus (and sometimes payments) accessed via QR codes on each table. Drone deliveries now carry the fantasy of a perfectly sterile supply chain, where no human ever has to touch an object. As we’ve reported, this year they delivered everything from PPE to bagels with trials taking place in Virginia and Florida.

These are all long-promised trends that now elide with the so-called “new normal” of pandemic living: staying home wherever possible and remaining ever-vigilant about hygiene in the outside world.

Where working in close proximity to others is a necessity, computer vision startups are now selling their artificial intelligence’s ability to monitor workplaces for adequate social distancing or mask-wearing. Amazon, in fact, has already implemented the technology — calling it the Distance Assistant — in warehouses. This is not the only area in which Amazon has pivoted. The Echo Frames — basically, glasses with Alexa — have this year been marketed by Jeff Bezos’ company as useful because they can be operated without touch, a form of computing you can interact with under a face shield. Amazon’s cashier-less ‘Go’ grocery stores have continued to expand — and all of a sudden seem more appealing than exposing oneself to a human supermarket worker.

These technologies were being developed already. But the imperatives of the pandemic gave them a new opening with the public. In a time of social change, when people are forced to pick up fresh habits, tech companies are all too glad to embed their systems of voice computing or computer vision in society. Whether we want, say, computers tracking the exact movements of every warehouse worker — how might that technology be used after the pandemic? — is another question. It’s a question worth asking because once we let powerful new technologies into our lives, it’s harder to turn back the clock on them later.

Perhaps we’ll wake up one day soon, do all our traveling, working and shopping while scarcely encountering, let alone touching, another organic entity. If so, the funny thing might be that this was the contactless, individualistic future we were headed towards already. It just arrived a little sooner.