It’s 6 A.M., and the alarm clock is buzzing earlier than usual. It’s not a malfunction: the smart clock scanned your schedule and adjusted because you’ve got that big presentation first thing in the morning. Your shower automatically turns on and warms to your preferred 103°F. The electric car is ready to go, charged by the solar panels or wind turbine on your roof. When you get home later, there’s an unexpected package waiting, delivered by drone. You open it to find cold medicine. Turns out, health sensors embedded in your bathroom detected signs of an impending illness and placed an order automatically. Good thing you already knocked that presentation out of the park.

All the automated attentiveness will come with a high price tag: consumers will spend $123 billion on IoT gear by 2021, according to advisory firm ABI Research, a number that’s likely to rise thereafter. Aside from Internet-connected televisions, manufacturers are putting their R&D and marketing budgets behind home-monitoring and security gadgets–they will have 22.6% of the smart-home market share by 2023, estimates research firm IDC, with smart speakers and lighting equipment not far behind, at 15.4% and 11.8% respectively. There are already at least 7 billion connected IoT devices, according to market-research company IoT Analytics. But as smart-home technology becomes easier to use and its benefits become more clear, the industry is poised to take off. “Sustained growth is expected to continue … as consumers adopt multiple devices within their homes and as global availability of products and services increases,” according to IDC.

Of course, as our homes learn more about us, keeping them secure will become all the more important. Every device that’s connected to the Internet is a potential target for hackers. When we’re talking about devices that can unlock our homes from afar, peer into our living rooms using cameras, and collect our most sensitive and personal data, cybersecurity will become all the more vital. Any kind of massive breach that turns off consumers, says Daniel Cooley, chief strategy officer at electronics-component manufacturer Silicon Labs, could be catastrophic for the industry. “I call it a mass-extinction event for the Internet of Things,” he says.

A range of technological developments will drive smart-home technology well beyond what’s available on store shelves today. Innovations in artificial intelligence, for example, stand to upend almost everything in our lives, including our homes. You might already be using some kind of AI-powered voice-assistant gadget to get the latest news or weather forecast every morning. But in the smart home of the future, those AI platforms could serve as the brain for entire homes, learning about residents and coordinating and automating all of their various smart gadgets. IoT company Crestron, for example, is working on software that tracks a person’s habits, like which music they want to hear in the morning or which lights they want to be on at a certain time of day. Then, once it gets the hang of a user’s preferences, it automatically plays just the right playlists or dims the lights before bedtime. “That’s really the next evolutionary step in true automation,” says John Clancy, head of Crestron’s residential business.

Robots, too, will have a role to play in the smart home of the future. Smart vacuum cleaners like iRobot’s Roomba are already picking up after us, while products like the Aibo, a robotic dog for children, show how they might help keep us company like a pet. As for the future? Robotic-furniture company Ori Living is working with Ikea on pieces that change based on your needs, getting the bed out of the way when you need a desk, or hiding your closet when it’s dinnertime. Design firm Design3 recently showed off a smart-home robot concept, CARL. The fabric-covered bot is meant to slowly roll around your home, activating its retractable cameras and sensors to detect intruders, notify you of any harmful emissions or keep an eye on your pet. And computer-graphics company Nvidia is working on a smart robotic arm that can act as its owner’s personal sous chef, doing everything from slicing and dicing veggies to helping with cleanup; it could be particularly useful for busy parents or disabled users. If such a device went into production, cameras and sensors could help prevent it from accidentally injuring an innocent bystander who’s just on the way to the fridge for a quick snack before dinnertime. 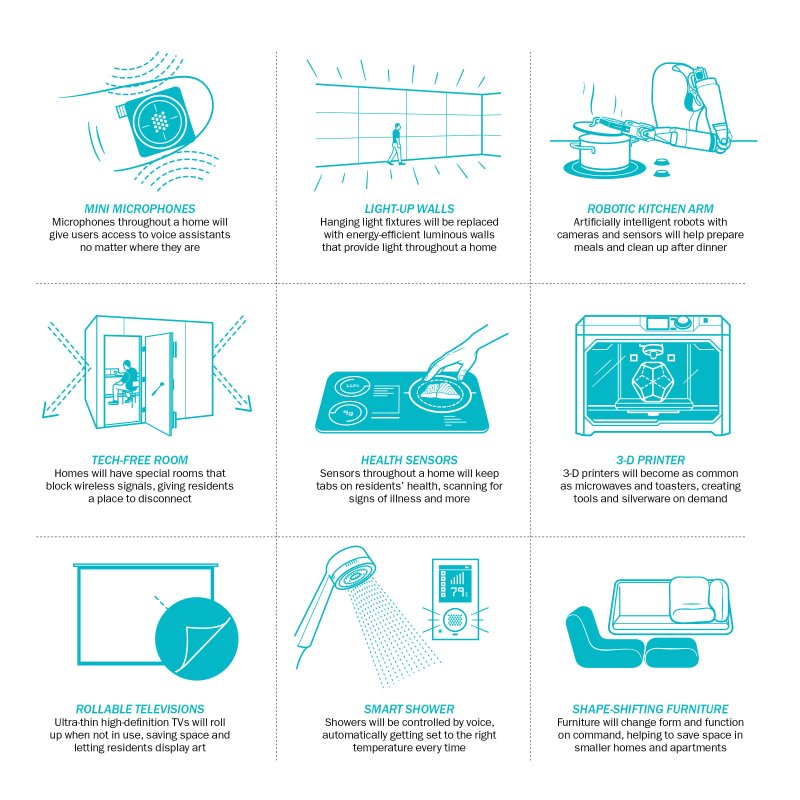 Illustration by Jameson Simpson for TIME

Health applications will drive at least some of the smart-home growth over the next decade. Cameras and sensors embedded in refrigerators will suggest more nutritious alternatives if people are reaching for the sugary sodas a little too frequently. Similar technology in medicine cabinets will check if residents have taken their prescriptions. And sensors will even show up in toilets to check for signs of any potential health conditions by scanning human waste before it’s flushed. Bathroom-fixture company Toto has experimented with urine-sampling toilets, while one company has filed patents for devices including a mirror that’s meant to monitor users’ health just by analyzing their skin. Homes will have health sensors of their own, too, that check for issues like water damage, pest infestation and so on, alerting owners to any potential problems before they become far costlier to manage.

All this learning and scanning that the smart home of the future will be doing may understandably raise privacy concerns. Indeed, some smart-home devices have already been targeted by hackers, whether to access the data they hold or to use them as tools in larger cybersecurity schemes. In 2016, hackers took over hundreds of thousands of insecure IoT devices, then used them to send bogus Internet traffic to target websites in hopes of crashing them; the incident temporarily crippled Internet connections throughout parts of North America and Europe. Government regulation is in the works too. A bill put forth by Virginia Senator Mark Warner in March would push the government to set up minimum security requirements for smart devices used by federal agencies; such requirements could eventually become standard for the industry at large.

You’re more likely than not to end up in a connected home one day, whether you mean to or not. Architect Michael Gardner, founder of construction firm Luxus Design Build, says homes are increasingly being built “smart” from the ground up. “It’s such an integral part of the home that we’re designing it from the beginning, where beforehand technology was always an afterthought,” he says. Ultimately, experts say, people will come to see smart-home technology as essential as electricity, refrigeration or air-conditioning. Smart-home tech, and the data it collects, will “be like plumbing,” says Cooley, from electronics-component manufacturer Silicon Labs. “You’ll rely on it.”

INTERNET OF THINGS TRENDS AND BUSINESS IDEAS TO FOLLOW IN 2020

Essential Features To Consider During Internet of Things (IoT) Development