Home IoT How the Internet of Things is Building Smarter Cities 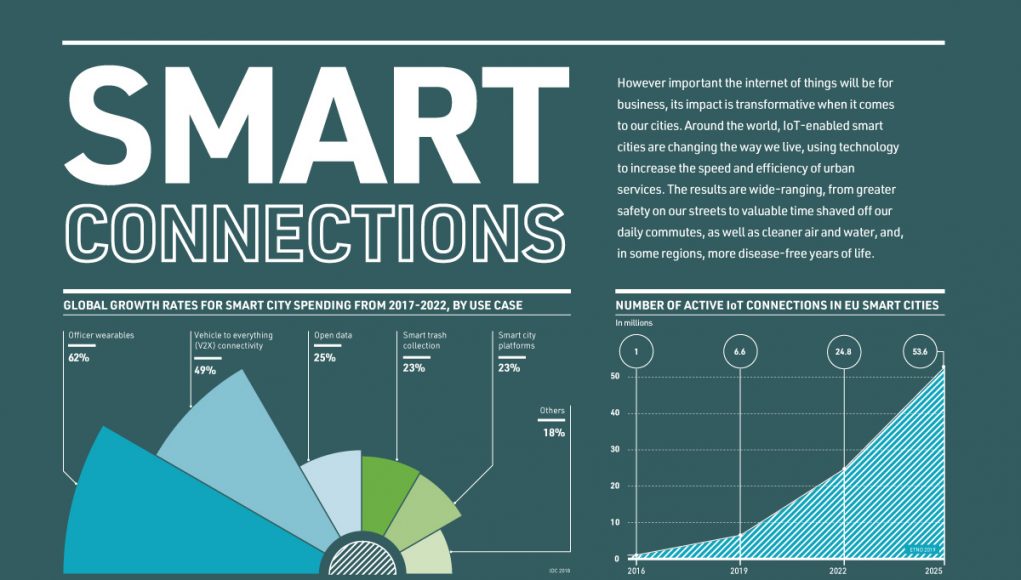 Urban populations are rising around the world, but cities are struggling to keep up.

As the silent force that has revolutionized our world, technology is now being leveraged to manage rapid urbanization and to create smarter cities.

Today’s infographic from Raconteur explores how the Internet of Things (IoT) has become a vital component in the creation of more efficient, sustainable, and resilient cities, and illustrates the growing impact this will have on both people and the planet.

The Growth of Smart Cities

Since 1950, the amount of people living in cities has risen almost six-fold, from 751 million to over 4 billion in 2018—more than half of the planet’s population. Over the next three decades, cities are projected to add yet another 2.5 billion more people.

This continuing migration to urban areas puts greater pressure on public services as well as urban planning. As a result, cities are implementing solutions driven by technology and data to reduce the added strain created by this growth.

With spending on smart city development to reach $158 billion by 2022, significant growth is expected from emerging innovations such as:

These technologies could lead to a wide-range of transformative effects for cities that are willing to embrace them.

Smart city technologies have the power to improve the health and well-being of citizens, while also providing new avenues for economic development.

According to McKinsey, tapping into these technologies could reduce crime rates and fatalities by 8-10%, potentially saving up to 300 lives each year in cities with a population size and crime rate similar to Rio de Janeiro.

As more vehicles join the IoT ecosystem, the bigger the IoT logistics and transportation industry grows, with spending estimated to reach over $43 billion by the end of this year.

New innovations like smart roads that support automated vehicles are beginning to get more investment from cities. These roads will be able to communicate with automated vehicles to ensure the safety of drivers, and better optimize traffic—potentially decreasing the average commute time by 30 minutes.

Technology is providing new strategies for the prevention and treatment of chronic diseases.

In China, drones with facial recognition technology are being used to track those affected with coronavirus to ensure they do not break quarantine and risk spreading the virus.

The most effective use of technology however, is data-based health interventions for maternal and child health, which rely on the use of analytics to identity new mothers and to direct prenatal and postnatal educational campaigns to them. Using interventions to prevent diseases before they occur has proven to be particularly effective in cities with a high disease burden and low access to care, such as Lagos in Nigeria.

These new technologies are reducing cities’ burden of chronic disease. This is measured across the WHO’s central metric disability-adjusted life years (DALY), which is equal to one year of “healthy” life lost due to contracting a disease. For example, using data-based interventions for maternal care could reduce DALYs by more than 5%.

While a significant portion of greenhouse gas emissions come from cities, these can be cut by up to 15% with smart city solutions by reducing electricity and heat production.

Smart cities will also play a pivotal role in reducing water consumption. Applications such as smart irrigation systems, water leakage, and quality and consumption monitoring could save a city between 25-80 liters of water per person, per day.

The growing uptake of 5G can help fuel these economic and social benefits. With its high-speed connectivity and ability to support more devices, 5G could empower smart cities to scale—making it a defining feature in the next generation of innovative smart city projects. However, this is not the only model that can be leveraged.

Some newer iterations of smart cities are grounded in the principles of equity and social inclusion. For instance, Vienna regularly tops the Smart Cities Index for its inclusive and collaborative way of approaching smart city initiatives. The city advocates for socially-balanced solutions that consider citizens from all socio-economic backgrounds and age groups.

Vienna is just one of many European hubs that are leading the way in the sheer volume of smart city project investments. In fact, the continent is expected to have as many as 53 millionactive IoT connections by 2025.

While every city has a different strategy, citizens will prove to be their most important asset. With a flurry of exciting new smart city applications becoming the new normal over the next decade, it is clear that humans will be at the heart of actualizing their true potential.

Looking Ahead: What’s Next for IoT